This little guy is a Coast Redwood (Sequoia sempervirens).  He’s about 6 months old, and a whole five-and-a-half inches tall!

Sequoia sempervirens are the tallest tree in the world.  (The tallest known tree, called Hyperion, is 379.7 feet tall.)  These magnificent trees grow only in a narrow band in Northern California and Southern Oregon.

There are two other species of redwood:

Coast redwoods are conifers…  they sprout from seed contained in cones.  A seedling may grow more than a foot in its first year.

Learn more about the redwoods!

Rocky is short for Rockefeller.

John D. Rockefeller was one of the founders of the Save The Redwoods League, in 1917.

In 1931, he helped to purchase 9,000 acres of old-growth redwood forest from the Pacific Lumber Company, and donated it to the Humboldt Redwoods State Park.  The “Rockefeller Forest” is the largest continuous stand of old-growth coastal redwoods in the world.

He, his son, and his grandson continued to make generous contributions to preserve  the redwoods throughout their lives.

We plan on watching this seedling grow for many years…  when it outgrows its pot, we’ll transplant it into a permanent home. 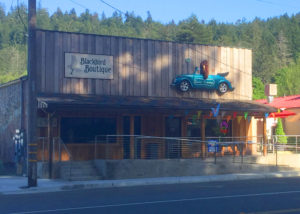 On our most recent visit to the Avenue, we were pleased to see two new businesses in the thriving little town of Miranda.

Blackbird Boutique offers a range of fun and fashionable clothes and accessories.

Sweet Cravings has a mouth-watering selection of ice cream and candies. The carved sign on the storefront features bigfoot eating an ice-cream phone and driving a Volkswagen convertible… it’s a perfect fit for the Avenue!

The businesses, which opened in January, are in the same building, located directly across the street from Miranda Gardens Resort. 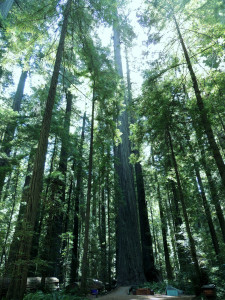 Lonely Planet is holding a contest to win a trip for 2 to the California Redwoods!

To entry, you’ll need to submit a short (25 word) statement of why you want to visit the redwoods.

Here’s a link to the contest entry page: 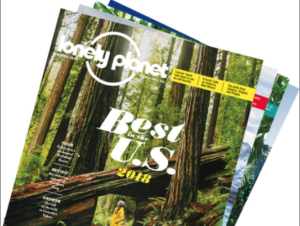 Lonely Planet, the travel-guidebook company, has selected California’s Redwood Coast as its number 1 US destination for 2018. Located four hours north of San Francisco, the wooded region spans 175 miles of coastline in Humboldt County and is home to the Avenue of the Giants, and trees that appear in blockbuster films such as Star Wars and Jurassic Park.

The travel company described the Redwood Coast as “an often overlooked region — even within California — but a vast and varied experience every traveler should have.”

The region, which includes Redwood National Park, is a perfect place to “lose all track of time.” It combines unique natural beauty with old-fashioned Americana and kitsch.

The Los Angeles times has just added the Avenue of the Giants to their California Bucket List.

As the article says, “This stretch of Humboldt County highway is a journey to the heart of redwood country, the largest remaining expanse of old-growth redwoods in the world.”

It goes on to mention several of the most notable trails and sites along the Avenue.

You’ll find many other interesting things to see and do in California while checking out the Bucket List.  Their are also tags to find Family-Friendly destinations, or attractions within a particular region. 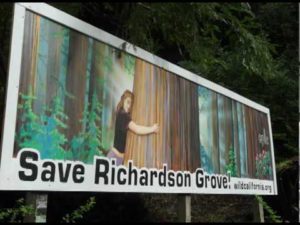 The Environmental Protection Information Center (EPIC) has filed a new lawsuit against California Department of Transportation (Caltrans)  to stop the proposed expansion of US Highway 101 through the Richardson Grove.

The section of highway is just a few miles south of the Avenue of the Giants, and passes through one of the most significant remaining stands of California Coast Redwoods.

CalTrans proposed the project in 2007, claiming that  it is necessary to accommodate larger commercial trucks. However, the project would damage or destroy more than 100 redwoods, many of them 1,000 to 2,000 years old.

The lawsuit was filed on June 23rd by EPIC and allied citizens and environmental groups. Three previous legal challenges blocked construction and forced Caltrans to rescind all project approvals in 2014.

Learn more about the Richardson Grove project and the lawsuit on the EPIC website. 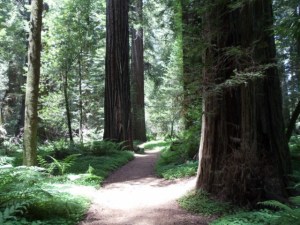 Since 2003, AVEOFTHEGIANTS.COM has been providing information and recommendations for visitors to the Avenue of the Giants.

We’re very excited to announce a major update of the Avenue of the Giants website, just in time for Summer! The update will make the site more engaging and accessible, and will provide more information, especially for kids.

Here are a few of the changes:

We invite you to visit AVEOFTHEGIANTS.COM, and give us your suggestions and feedback.

If you have a business on the Avenue of the Giants, please check the Towns section of our website to make sure the contact information for your business is correct.

Scientists Anthony Ambrose and Wendy Baxter, from UC Berkeley, are placing equipment in the crowns of five Redwood trees in a small grove at Bug Sur, California.  They plan to return to the grove regularly in the coming months to study how the trees are affected by climate conditions.

The equipment they have placed in the trees will monitor light, fog, humidity, temperature, and even the mix of oxygen and carbon dioxide in the atmosphere around the trees. In addition, it will allow them to track how much water the trees are using, and how the water flows through the trunk.

Redwoods have the unusual capability to absorb water from fog, which helps to sustain the trees during rain-free months.  One goal of the study is to understand how much of the trees’ water needs are absorbed from fog, versus drawn from the ground.  This is important to predicting how the trees will be affected by climate changes. 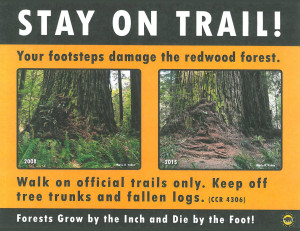 As more and more people visit the redwoods, the impact of walking off trail is affecting the health of the forest.  In addition to trampling plants, visitors can actually damage the roots of the redwoods, which grow near the surface.

The Park Service will sometimes build wooden walkways near some of the most famous trees (like the Giant Tree on the Bull Creek Flats trail), so visitors can get close without harming the trees or the plant life. 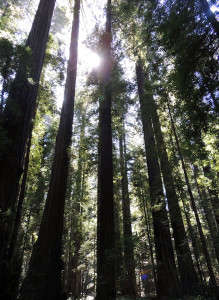 The redwoods, once seen, leave a mark or create a vision that stays with you always. No one has ever successfully painted or photographed a redwood tree. The feeling they produce is not transferable. From them comes silence and awe. It’s not only their unbelievable stature, nor the color which seems to shift and vary under your eyes, no, they are not like any trees we know, they are ambassadors from another time.

Redwood time moves at a more stately pace than human time. To us, when we look at a redwood tree, it seems to be motionless and still, and yet redwoods are constantly in motion, moving upward into space, articulating themselves and filling redwood space over redwood time, over thousands of years.

The greatest wonder is that we can see these trees and not wonder more.

The redwood is the glory of the Coast Range. It extends along the western slope, in a nearly continuous belt about ten miles wide, from beyond the Oregon boundary to the south of Santa Cruz, a distance of nearly four hundred miles, and in massive, sustained grandeur and closeness of growth surpasses all the other timber woods of the world.

A grove of giant redwood or sequoias should be kept just as we keep a great and beautiful cathedral.

A murmuring, fateful, giant voice, out of the earth and sky,
Voice of a mighty dying tree in the Redwood forest dense….
The wood-spirits came from their haunts of a thousand years, to join the refrain;
But in my soul I plainly heard.
Murmuring out of its myriad leaves,
Down from its lofty top, rising two hundred feet high,
Out of its stalwart trunk and limbs—out of its foot-thick bark,
That chant of the seasons and time—chant, not of the past only, but of the future…