Click the bars below to learn some amazing facts about the Coast Redwoods on the Avenue of the Giants.

When you’re through,  download the Coast Redwoods Quiz to see how much you learned!

There are Three Types of Redwoods


The redwoods found along the Avenue of the Giants are Coast Redwoods, also called California Redwoods. Sequoia Sempervirens is the official scientific name for the Coast Redwood. The trees grow in a narrow band near the coast of Northern California and Southern Oregon. Coast Redwoods are the tallest trees in the world!

Sequoiadendron giganteum is the official name for the Giant Redwood, which grows in the Western Sierras in California. Although not quite as tall as the Coast Redwoods, Giant Redwoods grow wider and more massive. In fact, they are the most massive things living on Earth! Giant Redwood also live a little longer than Coast Redwoods. They can live more than 3,000 years – which is still not as long as Bristlecone Pines.

Metasequoia glyptostroboides, the Dawn Redwood, was believed to be extinct until it was rediscovered in China in the 1940s. It is the shortest of the Redwoods, growing to a height of perhaps 200 feet. It is also the only deciduous Redwood, which means that it loses its needles in Winter.

Coast Redwoods are the Tallest Trees in the World


Coast Redwoods (sequoia sempervirens) can grow to be more than 360 feet tall!  They are the tallest trees in the world.

The oldest trees are Bristlecone Pines, which can be close to 5,000 years old (Coast Redwoods live to be about 2,200 years old).

The widest trees are the Banyan Trees in India. The crown of a Banyan can take 10 minutes to walk around! 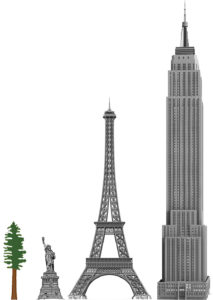 To visualize how tall Hyperion is, compare it to man-made structures and monuments.

At 309 feet, the Statue of Liberty (including the pedestal) is pretty close to Hyperion’s height. The status was build in 1875 and stands on an island in New York Harbor.

A Coast Redwood can grow 100 feet in the first 50 years. Even though a 50-year-old Coast Redwood is still just a “baby,” it looks like a mature adult.


Even though Coast Redwoods may be almost 400 feet tall, their roots grow only 6 to 12 feet deep! However, the roots spread out as much as 50 feet around the tree, forming a broad base to hold it steady in high winds, and to gather lots of moisture.

The bark on Coast Redwood trees is thick, tough, and acidic. It protects the trees from fires, and from burrowing insects.  It can grow up to a foot thick.

In addition, the branches on the Coast Redwood are far above the ground, so flames from brush fires can’t reach them.

The Oldest Coast Redwoods Are Over 2,000 Years Old


To put this in perspective, consider how major events in our history compare to the age of the oldest Coast Redwoods.

Jesus Christ was born a little over 2,000 years ago… that’s about the same as the age of the oldest Redwoods.

Since then, Europeans reach North America, and the United States was founded.

Rome was founded in circa (about) 750 BC, and the Egyptian Pyramids were built circa 2,500 BC, so both of these events happened well before the oldest Coast Redwoods sprouted. Of course, there were Redwoods growing then, but those trees died and fell long ago, and were replaced by new trees.

The Redwood Forests Have Existed for Millions of Years

Note that early ancestors of the Coast Redwoods appeared around 240 million years ago. These “redwood like” trees existed before modern birds, flowers, and spiders – and there were certainly dinosaurs around!